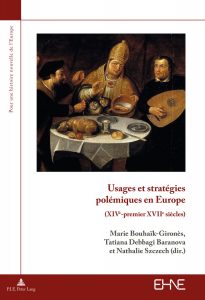 A collective reflection on the uses and strategies of polemics, this work seeks

to contribute to the ongoing development of historical reflection on the discourse of combat. Seeing polemics as a socialized discursive device situated in time and mobilized by action, the studies in this collection present varied polemical sources, and incorporate lessons from discourse analysis as well as social and cultural history. Their authors, who are historians or literary scholars, concentrate on the affirmation of polemics between the Middle Ages and the Renaissance, a time when the development of the printing press and the diversification of publicizing systems opened new polemical possibilities. The war of words proved at the time to be part and parcel of the tumult sparked by the progression of humanist innovations in the world of letters. From the war between the Armagnacs and Burgundians to the Fronde, the assertion of princes prompted people to take up pens as much as arms, while religious upheavals offered increased occasions for confrontations through words. This work, which is in keeping with a historical approach and is designed as a dialogue between medievalists and early modernists, seeks to gauge the relative impact of heritage and transformations in the conditions for polemical action. It will analyze over the long term both the forms, parameters, and types of actors involved in verbal confrontation, as well as tactical reflections on the effectiveness of polemical speech.