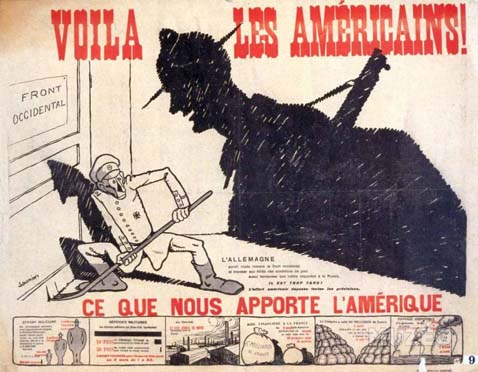 This conference, organised within the framework of the World War I Centenary French Programme, will attempt at shedding new light on the American entry in war in April 1917 as a decisive event for the end of the conflict as well as the 20th century history. Military and diplomatic aspects, in the usual sense, have been studied on many occasions and thus, will not be thoroughly studied. We will focus on a wide cultural area and will pay particular attention to the consequences of the American presence on the Old Continent during the last years of the war and the first years of the after-war period.

Several themes will be studied: artistic, musical and literary circulation, sports, eating and clothing habits, diffusion of scientific knowledge or industrial, agricultural and military methods, but also the wide range of aspects linked to ideas, practices and models of economic and political organisation. By examining the various contacts between Americans (be they soldiers, experts, artists, intellectuals, businessmen, traders; or diplomats and politicians), we will attempt at furthering our concrete knowledge of these decisive years in the process of international integration, arising in the late 19th century.

Three main guiding principles will define our approach and the conference papers:
– The types of influence and the channels of diffusion are essential to grasp the originality of this phenomenon and assess the reality of this “moment américain”. It will be necessary to work on different scales, from local to continental ones, to understand how and to what extent the influence of the United States progressively spread across the whole European continent. As a consequence, the arrival of the American troops in June 1917 in Saint-Nazaire harbour, the city where the conference will be held, is the starting point of this large process of diffusion.
– The actors, from both sides of the Atlantic Ocean, are also a key element and should be studied as closely as possible. Everyday connections between soldiers and local people, with sometimes adverse reactions against the Americans, as well as the memory of their presence could be potential topics for papers. Contacts and exchanges between military staff, experts and diplomats, including heads of States or of Government during conferences of the Allies or for the preparation of the treaties, could also be considered. As regards diplomacy, the American entry in World War I shakes up the traditional practices. The collectives or groups (religious or philanthropic associations such as American charitable organisations for the war wounded or the rebuilding of devastated regions, etc.) could be described, as well as their links with their European counterparts. The places of influence could also be studied.
– All in all, the conference will be replaced in the framework of a global perspective on transatlantic circulation, without avoiding the issues linked to an Americanisation process. Is it possible to mention a shift of this circulation, from America to Europe, or more generally a new step of a globalisation process which is no more limited to the Atlantic Ocean? The continuity and the evolution of the existing networks before the war and their development during the war (from 1914 or after 1917), from each side of the Atlantic Ocean, could be subjects for papers. The League of Nations, with its universal principles, and the negotiations that took place before its creation, in which the Americans and the Europeans were strongly involved, also provide with the ideological, structural and political framework for the debates on this third theme.

Researchers should send their proposals to michel.catala@univ-nantes.fr and stanislas.jeannesson@univ-nantes.fr before January 15th, 2017. Proposals will consist of an abstract of the paper (one page) and a brief CV. The organisation and the scientific committee will examine them in January 2017.

Papers could be in French or in English.

The conference is organised by the Research Centre for International and Atlantic History (Université de Nantes) and the LabEx EHNE (“Écrire une Histoire Nouvelle de l’Europe”), in the framework of the World War I Centenary French Programme and with the support of the City of Saint-Nazaire.